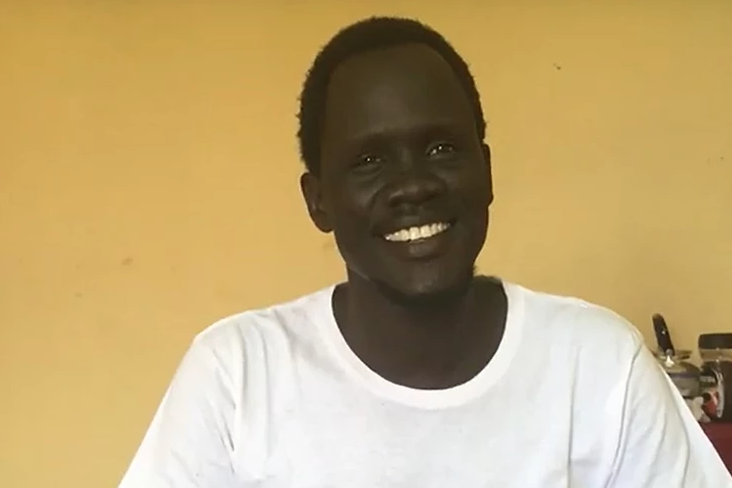 Wol grew up in an Arabic speaking area of Sudan where there were many Muslims.

“In my mind, as a child, I was thinking that what the Muslims were doing was not convincing me. It was not the real thing, but I didn’t know what is the real thing…They convinced my father to become a Muslim, but they could not convince me.”

Wol began reading the Bible and eventually became a believer. As a young adult, he was helping to lead a church in South Sudan when his pastor encouraged him to attend Streams’ Tyrannus Missionary School in Cairo.

At first he didn’t want to go.

He felt that his church would falter without his leadership. But he finally prayed about it and, indeed, felt like the Lord was making it clear he should go.

After being accepted into the Tyrannus school, Wol was sent to Cairo, Egypt, where he studied for a year and graduated in 2016. After graduation he went with a team of three to a village in South Sudan. The team began to do ministry among the children, slowly reached out to the women and finally to the men.

As they were reaching out to people in this village, they encountered an 18-year-old girl who was demon possessed. They prayed for her for three days before the demon finally left her. The girl’s family invited them to pray over their household. As they continued serving the community, more and more people came. Soon, they built a small shelter in the open square where they could host their ministry.

After 6 months on the field, however, Wol found himself alone. One co-worker left to continue his studies while the other left due to sickness. Wol was also frequently affected by malaria, a common malady in the village where he lived.

Despite these setbacks, Wol persevered. And the church continued to grow.

Even a physician began to attend the church. Wol recalls the physician joined after he was invited to pray for his wife, who was ill and unable to eat. After praying over her, they had a meal together and it was discovered that the physician’s wife could eat again without becoming ill.

Another miracle God worked in Wol’s life was in finding a wife. When Wol first ventured onto the missions field, he was single, yet he trusted God to provide for his every need, and God did.

Wol found this provision as he was looking for a wife for his colleague. The girl he found was too closely related to his friend, but as he got to know her, he asked God if it was the right time for him to marry and he felt it was.

When Wol proposed, he told her to pray before giving him her answer. She came back and said yes. Although she was willing, he still had to ask her family and come up with a dowery. After months, Wol finally had a dowery his wife-to-be’s family accepted: 20 cows.

Their marriage ceremony attracted 5,000 guests and was unlike anything the people had ever seen. Prior to their marriage, no one was married in the church as they were, and it was a beautiful thing to see, Wol recalls.

Now, Wol works with the Tyrannus Missionary School to raise up the next generation of church planters and leaders. Praise God for the willing hearts and hands who go out to spread His Word to unreached people groups. And praise God for the donors who partner with them to help make church planting possible!