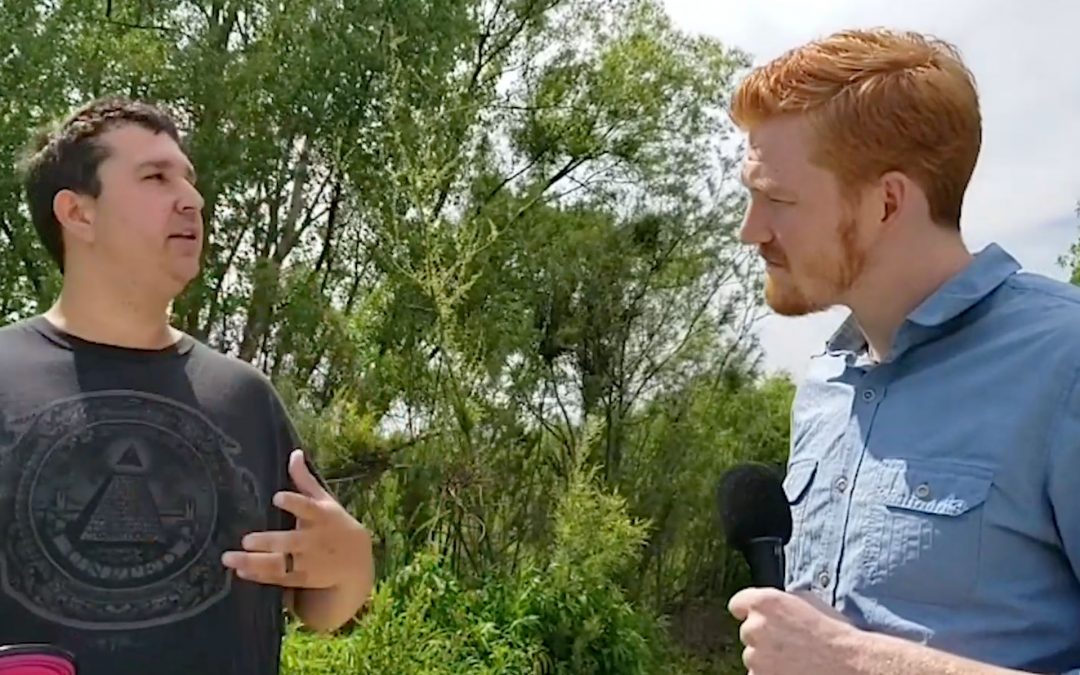 Jacob S. (pictured right), an evangelist and project manager with OneWay, took an Abrahamic leap of faith when he decided to join the team. After feeling a tug from the Lord in 2019, Jacob quit his job, packed his car, said his goodbyes, and set out on the long trek from Vermont to Illinois. It was the continuation of a  journey that had started years earlier.

As a hockey player at age 16, Jacob wanted to go pro. When Castleton University recruited him to play hockey, he saw this passion coming to fruition. After his first year in college, this dream fell apart after the team changed. Jacob quit hockey and felt as if his world was shattering.

“I lost hockey and my source of purpose, meaning, significance and identity,” he said.

In a search for answers, he took up another degree in Philosophy. Still, he was unable to find the meaning and peace he so desperately sought.

“At one point in my madness, I shook my fist at God and told Him that I hated Him,” Jacob recalled. “I selected Buddhism as my main worldview for life. I had an internship lined up for the summer of 2015 to study under a llama (teacher). That is when God revealed Himself to me.

“I woke up on Easter of 2015 with the desire to go to church. I found one online, drove there, and sat in my car outside of the parking lot. I remember feeling that I was supposed to be there. So I walked into the door, found a place to sit, and listened to the gospel for the first time. I understood that Jesus was carrying my cross and not His own.”

That morning, Jacob began to realize the meaning of an authentic relationship with the Lord and that from a young age, he had never fully put his trust in Jesus. He found himself ready to take that step and begin down a new path.

Jacob found everything he was looking for in Jesus Christ. “As an expression of personal assurance, I signed a little booklet about steps to peace with God. But even after this resolution, I still struggled with whether I was really saved. For a variety of reasons, I wanted a greater assurance that I had saving faith. I finally surrendered that fear to my God on December 1, 2015.”

Four years later, Jacob served at a missionary conference in Thailand. While there, he met OneWay founder Michael Thompson and learned more about the ministry. After returning to the States, Jacob began to pray with open hands about the possibility of joining a variety of ministries, OneWay among them.

“Almost a month later, I received an email from OneWay about coming to see the work being done and potentially joining the ministry,” Jacob explained. “This moment was pivotal for me. Only God knew about my wrestling in prayer after Thailand.”

“I had such a conviction that I quit my jobs, closed my lease, said my goodbyes, packed my car to the max, got rid of everything that didn’t fit and was commissioned by my church. I moved out on May 5, 2019, and drove to Naperville.”

It wasn’t long before Jacob felt a fit. “I caught the vision of OneWay and what God might be doing as He brought me into this context. I found an opportunity to work alongside OneWay’s Equipping Evangelist* and continue multiplying disciples in churches. I believe that God has called me to this ministry to do this work as a trainer and evangelist.”

We praise God for how He saved and called Jacob. And we look forward to how He will continue to use him to rally the church and reach the lost as he serves with OneWay.